NASHVILLE, Tenn. (May 5, 2015) — Americana/Country/Rock artist Shawna Russell has been honored by her hometown, Okemah, Oklahoma, by having a portion of downtown dedicated to the entertainer. Russell took time out from her touring schedule to attend the ceremony, along with Okemah Mayor Anthony Landers, Roger Thompson, a senator from Oklahoma, Wayne Bacon, Okemah City Council member, and scores of fans, friends and family members. Okemah also is home to legendary singer/songwriter Woody Guthrie.

"I feel honored to be recognized in this way for my musical contributions," Russell said, "especially in a community like Okemah, which has such an incredible background in this area. I am humbled that I will be a part of the town's history for simply doing something I love."

The honor, approved by the Okemah City Council, recognizes Russell's contributions to the music industry, as well as her positive representation of her hometown.

"As a native of Okemah and a graduate of Okemah High School, Shawna Russell has shed a positive light on the city of Okemah," Bacon said. "We would like to recognize the many accomplishments Shawna has made in the music industry and create a place for her many fans to come and appreciate her." 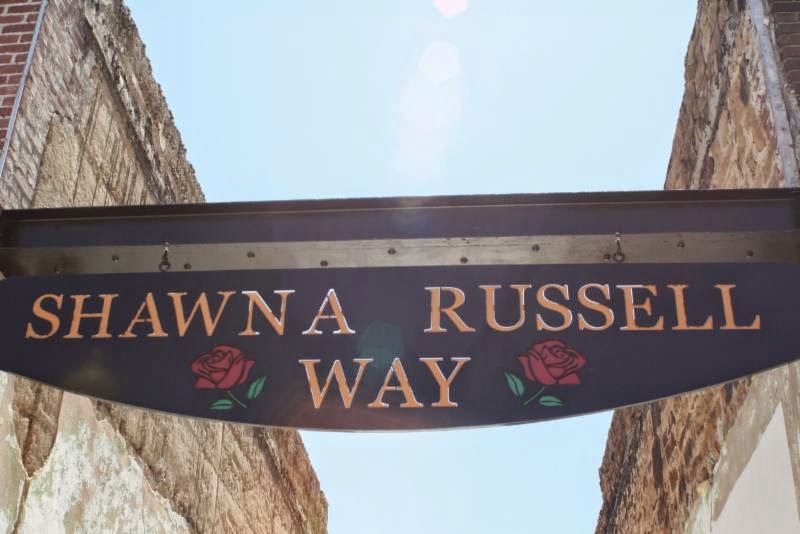 The city plans to have a mural created depicting Russell's career and life in Okemah, as well as a stage and performance area to be used during the annual Woody Guthrie Folk Festival and other events. Russell is scheduled to perform at the 2015 Woody Guthrie Folk Festival, which is set for July 8-12. Shawna Russell Way will also be a stop on Oklahoma's Music Trail, a statewide tour of Oklahoma's rich musical heritage.

Russell, whose music has received critical acclaim by Country Weekly, Billboard.com, CMA Close Up, Music Row, Today's Country Magazine, Texas Regional Radio Report and others, currently is touring with concert, casino and club dates throughout the Midwest in support of her self-titled CD. Her band includes her father, Keith Russell, and her uncle, Tim Russell, with whom she co-founded Way Out West Records.
Posted by Way Out West at 6:47 AM No comments:

The Current reviews Shawna & LiveWire at The Vanguard-Tulsa

May 2013 - Vol. 10 No. 5
Currentland Magazine online exclusive
TULSA, Okla. - Shawna Russell from Okemah, Oklahoma and LiveWire from Joplin, Missouri are truly vanguards of the country music industry.  I had the good fortune of attending their latest show at The Vanguard in Tulsa, Oklahoma - and it truly was a pleasure.


Read the whole review here: http://currentland.swirlhost.com/ViewArticle/1849/Default.aspx
Posted by Way Out West at 9:53 PM No comments:

NASHVILLE, TN (April 16, 2013) - Oklahoma female Country Rocker Shawna Russell
and Joplin, Missouri-based Country band LiveWire will co-headline in concert at The
Vanguard, 222 North Main in Tulsa, on Saturday, April 27. Doors open at 7:00 PM and
the show starts at 8:00 PM. General admission tickets to the “18 and over” concert
are $10.00 and may be purchased in advance online at www.thevanguardtulsa.com or
at the door. This show will be Russell’s second at The Vanguard this year.

Russell’s unique vocal style has been compared to Stevie Nicks and Martina McBride
and she possesses impressive skills on the electric slide guitar akin to Bonnie Raitt.
Her music blurs the lines between Country, Red Dirt, Americana, Pop and Rock music
and she blends those influences into a show that appeals to a wide range of ages.
Since 2008, Russell, who hails from Okemah, OK, has released two critically acclaimed
albums which have produced a string of charted singles in the U.S. and Europe,
including “Should’ve Been Born With Wheels,” “Fire In The Desert,” “Get Right Or Get
Left,” “Waitin’ On Sunrise” and “Sounds Like A Party.” Her music has been singled
out for praise by some of the top music industry critics and publications in the world,
including Country Weekly, MusicRow, Maverick, and many others. Russell’s busy
touring schedule has included recent performances with Randy Rogers Band, Dustin
Lynch, Rick Springfield and others.

LiveWire, based in Joplin, MO, has been performing together for over a decade and
recently released its debut album, LIVIN,’ which has won critical acclaim from Music
News Nashville, CMA Close Up, Roughstock, and other tastemakers in the music
industry. LiveWire’s edgy sound has been likened to the Marshall Tucker Band, Hank
Jr. and Charlie Daniels - with harmonies reminiscent of Rascal Flatts. With the release
of several successful singles including “Tater Fed,” “Miracle Of The Human Spirit,”
“Gone” “and Lies,” LiveWire’s homegrown style of Southern Country Rock has been
embraced by contemporary Country audiences and appeals to Red Dirt music fans as
well. LiveWire has appeared in concert with Kix Brooks, Casey Donahew, Diamond Rio
and others.

Both Russell and LiveWire are signed to Way Out West Records, an Oklahoma and
Nashville-based company co-founded by Russell in 2008.
Posted by Way Out West at 6:14 PM No comments:

Shawna Back With OK City Star

Oklahoma's The Current magazine, recently described Shawna's music like this:

"Russell is red dirt by way of Nashville. And the results should appeal to fans of both the mainstream country radio hits and the local roots country acts with a grittier approach."

Read about it here in a story entitled "Good things going down in The Brady District":
http://www.currentland.com/ViewArticle/1626/Default.aspx
Posted by Way Out West at 4:04 PM No comments: